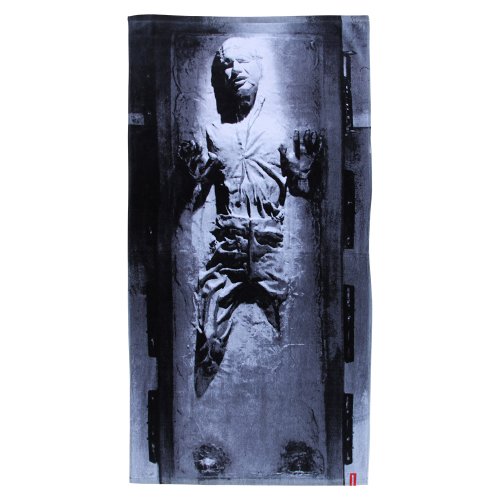 Han Solo has the fastest ship in the galaxy and is the best smuggler on this side of Tatooine. He becomes involved with the Rebels as he helps Luke Skywalker begin the battle for freedom from the Empire. At first he was only in it for the money but he soon fell in love with Princess Leia and took up the cause on his own. Made famous by Harrison Ford, Han solo is now an infamous character within the Star Wars galaxy for beginning as a reckless smuggler with sarcastic wit and then changing into a guy that won’t let his friends down. One of Han Solo’s most memorable moments is when he is frozen in a Carbonite block and hung on the wall of Jabba The Hutt’s wall as a trophy. This beach towel measures 30″ x 60″ and features this famous scene. Made of 100% Cotton to keep your body nice and warm, now you can take the Han Solo in Carbonite towel with you to the beach or when your at home. May The Force Be With You!